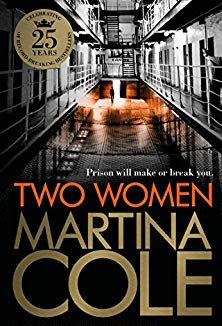 Susan Dalston, the prologue tells us, has murdered her husband, is in prison and is being transferred between prisons pending an appeal against her sentence. This is an appeal that she doesn't intend to go through with, it's just a means of getting closer to her family for a few weeks to make visits easier.

As is quite usual with Martina Cole novels, we find out the ending, or near ending, in the prologue and the rest of the novel takes us from an early point, through a desparately hard life to the point where we meet the prologue again.

In this case, Susan as a child, is unloved by her mother, disparaged by her gran and abused by her father. On marrying her childhood sweetheart (not giving anything away here as the marriage is mentioned in the prologue) life goes from bad to worse. There are disturbing and black scenes in this novel, to my mind the blackest of Cole's novels that I have read so far. Women reading this book will relate to Susan and will feel for her from start to finish. Men reading this novel will look for the lovable rogue, or the bad son that still looks after his family - but will be disappointed as no such character exists. There are no nice men or partly nice men with any major role in this novel, perhaps a deliberate ploy on Cole's part to make the reader, male or female, relate to Susan and nobody else. Choosing a typical passage is difficult without giving the plot away so, from the prologue we have..........

Matilda left the cell and came back with two large mugs of tea. She opened a packet of digestives and placed a few on the bunk beside Susan.

Susan interrupted her acidly "One hundred and fifty two times with a claw hammer? Yes, I did, I counted the blows, it gave me something to focus on."

I don't think I could read two Martina Cole's novels in succession and after "Two Women" had to have a break from reading completely, such was the power of the novel, leaving the reader shocked in most chapters.