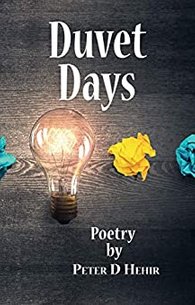 It just came to me, before writing this review, that reviewing a novel would not bring the comment “my favourite chapters were” but a book of poetry does leave me with favourites.

Dimpleforth McMuckwind. A modern day take on an old-fashioned idea of a husband seeing value in a wife's slave-like attitude and wishing to benefit from it, financially.

Cynefin, a Welsh word although the poet appears to be a Midlander of England. In some areas of Wales, a word denoting a certain habitat, a place familiar to that person or, as an adjective meaning one of those hill tracks, made by sheep. So, as a single word as a title to a poem, maybe a combination of all these meanings.

The poet Hehir describes a place maybe familiar to him and through his poem, now transplanted into my consciousness. I see, on a hot sunny day, the poet in a large back garden, sat on a lawn and describing the things he sees around him.

Beautifully crafted. Maybe not what he saw but certainly what I saw.

By sheer coincidence I read The Town That Roofed The World on the day after the area (the slate quarries of North Wales) received World Heritage Status. After pondering Hehir's nationality above, it becomes clear that he is either from North Wales or travelled there from Birmingham, maybe on holiday. This poem is about Blaenau Ffestiniog (I've stayed there myself) and the surrounding area, sees my mind watching the poet cycling (why?) from here to where he has a holiday winter-let for a week, in Porthmadog, where a warm fire awaits.

Apples and Androids is a gentle rant against mobile phones taking over from actual interaction with those around you.

I Am Love is a delicate poem, accurately expressing something we all find difficult to express in words.

I enjoyed the whole book and will seek out more.