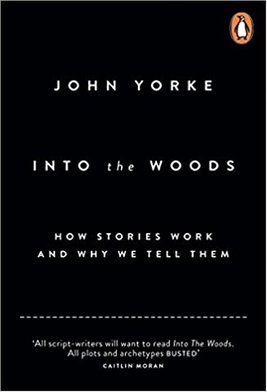 Five act story structure was a new concept for me and I was only just spotting three act structure in films and novels. So why the change?

Listening to one of my favourite podcasts, Dan Simpson’s Writer's Routine, an author mentioned their routine changing after reading Into The Woods by John Yorke. Being the cautious type, I downloaded a sample to my Kindle, then downloaded the whole book. I soon found that I was highlighting so many notes (most of each page in some chapters) I knew I’d be better off with the Penguin paperback.

I now have the paperback, started from page one again and filled with biro underlining and margin notes. The book sits proudly next to The Story Grid by Shawn Coyne.

Perhaps it is best here to explain that The Story Grid teaches three act storytelling and Into The Woods teaches five act structure. Both books use film as examples (directed at film script writers) but both books point out that a story is a story whether film, novel, short story or anecdote in a pub.

So are you as an author, a pantser, plotter or hybrid? Personally, I am a hybrid. I pants the first few chapters, recognise the beginnings of plotting, plot the novel into a structure up until about two thirds of the way through and then pants my way to the end with plotting in the back of my head. All my plotting is done on a huge spreadsheet, in Excel, with roughly twenty headings of columns and a line for each chapter. (now roughly six chapters to an act so thirty chapters in all of approx 3000 words per chapter so 90,000 words total).

What I prefer about Into The Woods over Story Grid (which is based on The Silence Of The Lambs)  is that more examples are highlighted of five act novels, as well as film, including Shakespeare, but the book goes into a lot more depth alongside the structure teaching. Chapters on:

“Good story telling never gives you four, it gives you two plus two. Don’t give the audience the answer.”

This chapter goes into much greater detail than I have seen elsewhere on showing. It includes descriptions of advertisements and how they work and explains the Kuleshov Effect which is too complicated to go into here – buy the book!

My favourite piece from this section is an anecdote about the late, great John Peel. He attended a concert and found Kim Wilde boring. He could have told his readership “Kim Wilde was boring,” instead he showed them by writing the following. “Gary Davies appeared (on stage) to ask us if we were ready to boogie before urging a huge Wembley welcome for Kim Wilde. . . (and) there she was, waving a red scarf and bending over a lot so that the cameras could catch the cleavage. It’s great to be here, she said. After a song or two a discussion developed in our row about the catering staff, who were dealing out the lager and cold dogs in what seemed to be Motherwell colours. We reached no important conclusions.”

Starts with a script from Tinker, Taylor, Soldier, Spy by John Le Carre as dramatized by the BBC.

In the following paragraphs, I underlined;

“we all have the ability to love, to be jealous, to procreate, to be defensive, to be open, to be vengeful, to be kind.”

“Everyone customises, consciously or not, everything they do.”

“everyone surmounts the same obstacle uniquely and in doing so leaves their fingerprints behind.

A chapter explaining that – People construct a public face in order to deal with the conflicts that rage inside them.

I underlined a paragraph that discussed, under a sub-heading, on Ego Defence Mechanisms.

“Faced with extreme stress some characters will laugh, others will cry, some will intellectualise, some may punish others. It’s a corner-stone of characterisation, but it’s a centre piece of psychological theory too.”

The section goes on then about Freud, Neurotic Conflict and what Hollywood calls the Rubber Duck.

A section on making it possible to present all the information an audience requires without letting them know it is being done.

discusses the reasons that stories are told in a certain way and goes into it quite heavily giving multiple examples.

From this section came, to me, the most profound quote in the book, the quote that made me realise that all novelists are empathisers. We have to have empathy with out protagonist and pass that empathy to the reader but must also empathise with the antagonist, not like him but empathise, know his thoughts, his reasons for being as he is. The quote was from the novelist, Ian McEwan, printed in the Guardian newspaper, four days after the attack on the Twin Towers in New York, September 2001.

“This is the nature of empathy, to think oneself into the minds of others…If the hijackers had been able to imagine themselves into the thoughts and feelings of the passengers, they would have been unable to proceed. It is hard to be cruel once you permit yourself to enter the mind of your victim. Imagining what it is like to be someone other than yourself is at the core of our humanity. It is the essence of compassion, and it is the beginning of morality.