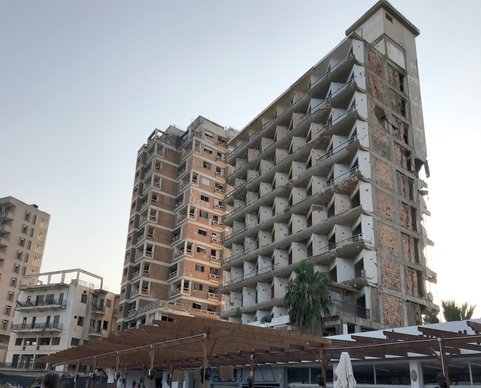 A beautifully contrived view of emotions and friendships, set in a complicated saga on a complicated island at a complicated moment in that island’s history. Made poigniant in 2020 with the news that the occupying Turkish forces intend to not hand the area back to the rightful owners but intend to reopen the area for their own pleasure and to boost tourism.

Not the first of Hislop’s novels I’ve read and, as always, a sense of extremely accurately researched history is brought to life by interweaving a story through it. I happen to know, through talking to those still living on the island, that the author’s research was thorough on both the Greek Cypriot and Turkish Cypriot side and an unbalanced view given in this novel.

Through the relationships of husbands and wives, women and lovers, friends, supposed enemies, businessmen and their contracts, and the experiences of two supposedly opposing families, we experience maybe a part of what it must have been like to live through these turbulent times. The passions, needs and wants of all involved are delicately portrayed and the characters (all, major and minor) develop through the novel, sometimes surprising us in how attitudes can change when situations become pressurised and food becomes scarce and greed is rife. I suppose that in the back of every reader’s mind is, “What would I have done in those circumstances?”

Many who read this novel plan a holiday in Southern Cyprus with a view to experiencing the flavour of the novel.

For visitors to Southern Cyprus, who are on holiday, there are places to visit that are mentioned in this novel and the tour operators Tui, from any of the Louis Hotel chain that they use, organises a brilliant tour. Pillars in The Sunrise Hotel in the novel are laid out to resemble Salamis and this archaeological site can be visited in the north after crossing the artificial border. Be warned though that not all of the site is allowed to be visited by the Turkish authorities who will also not allow further digging at the site and, depressingly, they will not even allow any restoration of incredible roman period painted plaster that is slowly deteriorating. Lovers of history and those that would want such things to be preserved for those to come after us, may find this a bit depressing.

Famagusta itself can be visited, again after having your passport scanned to cross the artificial border into the north, and the ‘old town’ is an interesting place to visit and appears to be totally Turkish in its appearance. We stopped for a frappe in a wine bar where the owner proudly showed us that his bar area was in part of the old French Gothic cathedral (now a mosque) but his side room was in a domed school-room where the Koran was once learned by heart. All of this gives you a flavour of the differences between Greek Cypriots and Turkish Cypriots and helps us to understand the two families that interact with each other through the novel.

Readers will be impatient to get to Vorosha, where most of the novel takes place. The hotels are still there, unchanged from the time of the novel, still bombed, still pock marked with bullet holes, still with barbed wire around and notices everywhere stating that photography is not permitted. The occasional glimpse of a Turkish Army guard stops any photography taking place. It is easy to imagine any of the hotels in front of you (as seen from the beach) being The Sunrise, maybe the novel wasn’t based on one particular one, I don’t know. After leaving the coach, the first hotel we saw had been bombed near the lift shaft and we were told that the lift had, years ago, been visible half way down the shaft. Because of complete neglect of the whole area, the lift slowly descended down the shaft and can no longer be seen. I could imagine someone (no spoilers) living there, unseen from below. Unfortunately, the roads around the hotel area are out of bounds and cannot be visited or seen from outside.

The whole trip to the north was worth it and added immensely to the novel, producing a second and more understandable read on returning home. Hislop’s skill at educating you while making it enjoyable will be well known to readers of her other novels. Life on the island was left behind to those that still live there knowing that there are not only still tensions between Greek Cypriots and Turkish Cypriots but also between Turkish Cypriots and Mainland Turks that have been offered incentives to move to the island and given homes that were earlier abandoned.

The complicated life of the island was demonstrated as out passports, that were scanned on the way north, were re-scanned travelling south, by Turkish authorities but we had to keep our passports out to be checked again to get into and out of the British held area, next to the border.

Has reading this novel and visiting the island made me want to read more of Hislop’s novels – yes. Would I holiday in Turkey or in the illegally held north of the island – no. We were careful not to spend any money in the north (the frappes were needed in the heat), not to subsidise an illegal regime. It would appear, according to Google, that no country in the world recognises Turkey’s illegal occupation of the island, except Turkey itself.