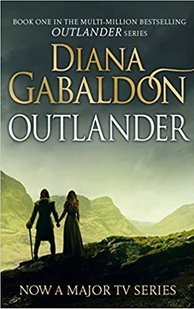 My first delve into historical romance and I enjoyed it. Diana Gabaldon does a good job of keeping the reader interested in both the history, the plot and the romance, and all in equal measure.

Other reviews have stated that she is accurate in her research but I can make no claim to be knowledgeable enough to agree with that. Certainly, there are masses of facts in the novel, historical, botanical, herbal etc. But those facts do not get in the way of plot or romance and merely add to the overall feel of the story.

I did not, at any point, think that this was an author interested in history who needed a plot and a romance to make the history more palatable. I lived the plot, the tortures, the loves and the hates and enjoyed the novel immensely. I have to make a decision whether to continue with the series, maybe after a break through reading a different genre.

As a male reader, I related to Jamie and lived his trials. I can imagine female readers identifying with Claire, romanticising over two loves and wondering if practicality would take them one way or the other. I have also read a review from someone who said that the sexist brutality could not be accepted by them and I think we have to remember that in the 1750’s things were slightly different.

If I had one criticism it would be that at one point, about two thirds of the way through, I felt I’d reached a solid ending and the book could have been completed there and then. Those who have already read this novel will know the point I speak about. I worried that the last third would be filler, changing a novella into a novel. Although the last third was not, to my mind, as exciting as the previous part, it still held my interest and enjoyment.

I’ve returned to this review some two years later because I found the series on Netflix. I am enjoying Series 1 and will now have to follow up the books before watching the next series – I cannot watch a film /tv series and then read the book, so here goes with Dragonfly In Amber.