Book Two of the Delirium Trilogy 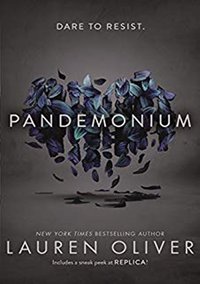 So, how do you review book-two of a trilogy without giving away spoilers to book one?

Carefully is the answer. The style of Pandemonium is similar but not exactly the same as in Delirium. If you enjoyed, in Delirium, the first-person present tense, with everything seen through Lena, the lead protagonist’s eyes, then Pandemonium will not disappoint. If you enjoyed the descriptive flow from the author of Lena’s sight, smell, touch, inner feelings, then yet again you will not be disappointed and you will easily live the story through Lena’s eyes, her feelings and her emotions.

The main difference in Pandemonium is the double time lines of ‘then’ and ‘now’ which are alternating chapter headings. The reader is tasked with wondering what happened in the ‘then’ story to start the ‘now’ story. There is also more action and adventure in this second part.

Another well written part to the trilogy that I enjoyed. Phew, I think I got through that without any spoilers. Wondering how others had reviewed the book without spoilers, I took a sneak peak. The answer seemed to be lots of spoilers to book one. Hopefully, reviewers had assumed that potential readers would not read their reviews of Pandemonium until after reading Delirium. The other thing that struck me was that I had read both books as adventure stories with a love interest, whereas, many had read them as love stories with an adventure interest. Thankfully, we are all different.

So, will I read book three? Requiem. Most definitely. Delirium I could have accepted as a one-off novel. It was so well written and got me living in Lena’s head so efficiently that I decided to go for book two, Pandemonium. I am guessing that the author felt that book two of a trilogy didn’t have to stand as a one-off (if you’ve read two out of the three then you will probably complete the trilogy) so she gives us a shock of such magnitude that it makes the reading of book three a must. I can’t wait.