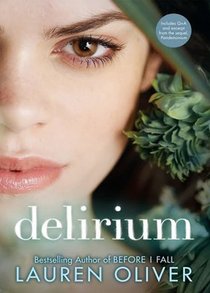 A young adult love story, full of adventure in a dystopian world.

Young love written at its best. I’d read good things about this novel and decided to give it a try. I started by wondering if I’d ever read a book in first person, present tense and could only think of a couple. I soon got into it though and it didn’t bother me. I got into Lena’s head as if she was talking me through her thoughts and anxieties. By the end of the novel I’d changed gender and was Lena.

Delirium is part of the Latin name for the disease we know as love, which has been outlawed and we soon learn that at eighteen everyone goes through a procedure to rid themselves of any ‘love’ feelings and are then paired off with a suitable mate. Maybe it’s because, a few books back, I read The Housemaids Tale by Margaret Atwood, that I associated the two books and thought that Delirium could well be a prequel to Atwood’s dystopian novel.

In both novels it is the poor old USA that has been locked off from the rest of the world and seems to be hijacked by religious zealots. From outside the USA, and if Twitter is anything to go by, it seems that a lot of people over there are worried about the future. Maybe that’s why this sort of novel has become more popular at the moment.

Again, early on so not a spoiler, we learn that Lena’s mother bucked the trend and fought against ridding herself of love and that her daughter Lena worries that the gene may have passed to her. The novel is a will-she-won’t-she type of story that I raced through, (eight days is racing for me) enjoying the world that I was sucked into. I’m sure that as a man, if I was engrossed in Lena’s plight, any woman reading this novel would be equally engrossed. I enjoyed immensely and have just downloaded book two, Pandemonium.