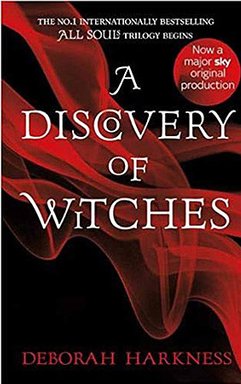 A Discovery Of Witches.

Forbidden Love between a vampire and a witch.

Firstly, a warning. Some trilogies have a start and a finish to each of the novels, with the heroes going on a single quest in each book. This is not such a trilogy and you shouldn't read the first book expecting resolution at the end, or even a conclusion to the main story. It leaves you hanging and you either read books two and three or you leave disappointed. (Series one of the TV shows does the same thing.)

I read this novel after the TV series aired but hadn't watched it. Then, as with all read then watch, felt surprised the characters were not the ones in my head, although the aunties came pretty close. I am presently watching series 2 before deciding whether or not to read book 2.

I loved this book, got deeply involved with the characters, their development throughout the novel and the story itself. It might have appeared in my bookshelf of top ten novels, certainly would have reached a top twenty list, but for a few personal gripes that knocked it to a four star review.

My Timeline:- started watching episode one of the tv series, turned it off and decided to read the book instead, got half way through the novel and read some reviews, couldn't understand some of the comments in the reviews, finished the novel.

My suspense of belief, of the novel's world, was complete while reading. I took for granted that the incredible amount of research by the author into historical facts was accurate (who am I to argue) and everything said about the relationship between witches, vampires and daemons seemed logical. The fact that they could all become friends, and because of their friendship, attract enemies, seemed to work completely. I found the novel a page turner, so why only four stars?

Someone reviewed this novel after hearing the audio version and commented that the accents of the characters were well portrayed by the reader. I can completely understand this but, as I found, time and again while reading, I didn't know who was speaking and the voice of a narrator would have helped enormously. Three-way telephone conversations were confusing, a host of people in the same room even more so. Far too often a paragraph of speech is completed by 'said Matthew' for instance, shocking you into changing the voice you just read in, or even going back in the story. There are even instances of a character thinking, acting, speaking, but then you find out that the speech is by someone else. It would be interesting to find out how the narrator in the audio version coped and whether they had to re-read parts and change the character voice on the second read.

Some reviews that I read mentioned an editor being needed and I agree. The film running in the author's head is clear to her with regard to who is speaking, but that needs to be conveyed to the reader. I thought this all the way through the book and was shocked at the end, on reading the acknowledgements, that not only was an initial editor thanked but also a second editor 'to polish things up.'

Something that would be brushed over by most readers (I guess) but added grit to my reading enjoyment, was the fact that practically the whole novel is written in first person past tense, which is fine, but the odd two or three chapters jump into third-person omniscient past tense when Diana is away from Matthew and we hear Matthew's story. Probably me and, as stated, most won't find it a problem but I would have preferred those parts to have been in Matthew's voice.

Research, as I said above, seems to be thorough. So why did the following grate so much in my head? Early on in the story, while in the Bodleian Library, in Oxford, England, a discarded newspaper Diana reads, refers to deaths in London and refers to 'the Fall of 2007'. Fall? Autumn over here folks. British people never use the term Fall and a newspaper certianly wouldn't. Worse, the reference 'A quick check revealed that my body was naked and tucked tightly under layers of quilts, like a patient in a British intensive-care ward.' What?

So, a few gripes but still a 4star review. Will I watch the TV series? - Yes, eventually. I tried the first episode for a second time and realised that the term 'based on' had been applied only loosely but then carried on regardless and got to the end of the series. Series 2 is now on Catchup TV and I am catching up slowly when in the mood. Guess what though - I expect a cliff hanger at the end of the series to make me watch series 3.

Will I read the second and third in the trilogy? Yes and they are on my 'to read' list. The gripes that I have, are worth it for being immersed in this world, away from reality.

A Discovery Of Witches.

Forbidden Love between a vampire and a witch.