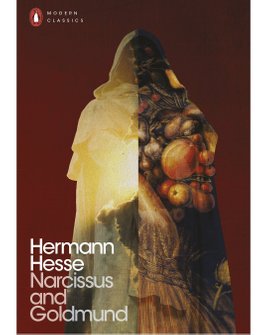 When I first read this novel it was called Narziss and Goldmund, earlier in the German it was Narziss Und Goldmund. I was brought back to it by reading "Lamb" by Bernard Mac Laverty and, in the words of those dreaded exams, you should compare and contrast the two books. I would suggest reading them one after the other.

Narziss, a novice monk who, for his young years, has great teaching responsibilities, befriends the 'new boy' Goldmund. Goldmund has been left at the cloister by his father who has managed to practically wipe clean Goldmund's memories of his own mother. The story , beautifully written, starts as Goldmund's attempts, spurred by Narziss, to remove the block on his memory.

"A short while since, Narziss had ended the novitiate, and would soon be clothed and consecrated priest. His bearing towards his friend had changed, though Goldmund, who, before his swoon, would chafe at Narziss' questions and admonishments, as irksome pedantry and arrogance, now, since his pain had brought back memory, was full of ever wondering gratitude for the skill and wisdom of his teacher. How deeply had this uncanny scholar read in him: how exactly probed the hidden sore."

This therefore is a psychological novel taking part, in the first instance, within the cloister and contrasting in many ways with Mac Laverty's "Lamb" while at the same time having many similarities. Both novels are about members of a religious order befriending a youngster who has been sent to the cloister. Goldmund has arrived, abandoned by parents, as a scholar from a rich family whereas Mac Laverty's Owen has arrived, again abandoned by parents, via thievery and the courts of law. In "Lamb" the journey out of the cloister is made by both and this is the healing process for Owen, in Narziss And Goldmund the healing process takes place in the cloister and Goldmund's leaving is the start of his real (and as it turns out, full) life. Hesse has a recurring theme of travel in a lot of his books. Travel alone but meeting 'friends' along the way.

Reading which of these novels first is, I think, irrelevant. They should be read together though, if only to reveal the differences in style between the beginning and the end of the 20th century.