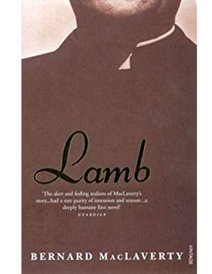 Important note;- if searching any sites (including Amazon and Goodreads) or using search engines for Mac Laverty's work then use the correct 'Mac Laverty' but also the incorrect 'Maclaverty' - with differing results. Try it!

"He paid no attention but later asked Owen to stay behind. He looked at his hands and wrists. They were swollen and red. On the wrists were several horse-shoe-shaped welts, crescents where the blood had been brought to the surface, but the skin had not broken. 'How many did he give you?"

'It's a cold morning for it,' said Michael. 'What was it all about?'

When he heard the story the whole thing seemed ludicrous. Someone had stolen a can of spray paint from the technical block and written in huge awkward letters; BENNY DIES O.K. Brother Benedict thought it was Owen. 'What made him think it was you?'

'He said they were my initials'

When Brother Sebastian's father dies, leaving him a little money, he sees it (for a number of reasons) to be a good time to leave. Owen, the young boy of the dialogue above, has no life, parents that hate him and no future. Thankful for his own upbringing, Brother Sebastian decides to take on the role of father to Owen and the two leave together. The local radio station call it a kidnapping.

This novel should be read either just before, or just after Narcissus And Goldmund by Hermann Hesse with which it should be compared / contrasted (nightmare phrase from exam days). Both are monastic tales of Teacher and pupil and the great search for life. Both are excellently written and should be read by all.

Lamb takes us through experiences that are not what most of us can imagine happening to ourselves. Mac Laverty, however, takes up the challenge beautifully and takes us through the thoughts, feelings, ups and downs of this 'father and son.' Highly recommended.