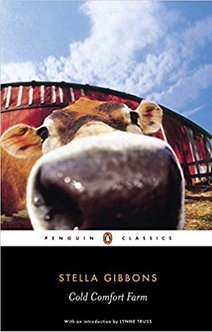 When I first read this novel, some twenty-five years ago, I found it fascinating and, at that time, it was a bit of a cult novel. Families who had all read the book, talked to each other by using quotes from the book. Nobody bought it then, it was passed from person to person as a dog-eared paperback. Thus it was a surprise for me to go into the Amazon reviews to find it was rated two and a half crowns out of five. On further investigation, one reviewer had loved it and scored it 5, two others had hated it and scored it one (this was 25 years ago). I note now that it is a Penguin Classic!

I was careful not to watch the film as I was sure that it would destroy the mental images built up in my mind. Such as the following;-

"A little later, as she (Flora) sat peacefully sewing, Adam came in from the yard. He wore, as a protection from the rain, a hat which had lost - in who knows what dim hintermath of time - the usual attributes of shape, colour and size, and those more subtle race-memory associations which identify hats as hats, and now resembled some obscure natural growth, some moss or sponge or fungus, which has attached itself to a host."

The above makes me smile, I find it cute and enjoyable and warm. It is not belly-laughing material and doesn't pretend to be - so why the publishers describe the novel as a comic classic is a mystery to some and an annoyance to others. In these days of fast TV comedy, more is expected. This book was first published in 1932 and is therefore capable of slowing you down to the speed of the day, much as, say V.S. Naipaul's Mystic Masseur, written in 1957, would do.

The relatively sophisticated Flora is farmed out to her country cousins who smack of in-breeding and tribalism, right down to family structure with a chief at its head. There are questions continually thrown at the reader who somehow knows that the answers will never be found. It is not giving anything away to tell you that months after reading this book you will talk to yourself while walking down the street "I wonder what Great Aunt Ada Doom did see in the woodshed that was so nasty."