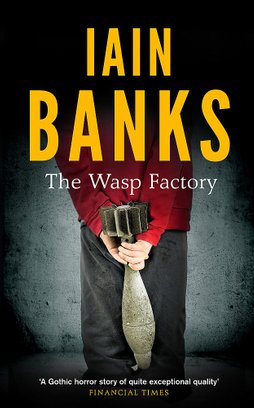 Later and better books by Banks have, in their inside cover, the words "Iain Banks came to controversial public notice with the publication of his first novel The Wasp Factory in 1984. Since then....."

The many professional reviews added to the front of The Wasp Factory, by the publishers, show that this is not a book to be "liked". It will be either loved or hated. If you have not read Iain Banks then this, his first novel, is not the place to start.

I would suggest that the possibility of you not enjoying this book and therefore abandoning Iain Banks as an author, is too great. As an introduction, why not try Espedair Street or The Bridge and come back to this novel later as a curiosity item. You will then find out about two brothers with no idea of the effect that they have, on other people, or death. This is banks getting into the head of someone who is isolated geographically and mentally, hence the not understanding the effect on others.

"I looked round the Bunker. The severed heads of gulls, rabbits, crows, mice, owls, moles and small lizards looked down on me. They hung drying on short loops of black thread suspended from lengths of string stretched across the walls from corner to corner, and dim shadows turned slowly on the walls behind them."

My personal opinion is that this is a first novel, meant to shock and get the author noticed, which it did, successfully.