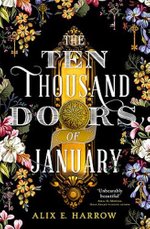 I read this slowly, not wanting the experience to end.

It was an experience. Sometimes you read a book and sometimes a book wraps you up in images and metaphors that you don’t want to end. I experienced this book, experienced January’s story, from page one to the end.

Descriptions often conjured memories for me as I read, like the sculpted hunk of wood I found as a child, the wood that had been washed up on the beach, had been in the ocean a while and where soft summer growth had been dissolved leaving the harder winter growth rings standing prominent. That came to me when I read; -

“It was an old door, nothing but a series of gray planks so time-worn the grain of the wood had weathered into ridges like the whorls of fingerprints.”

There are many items of ‘it was LIKE’ too numerous to mention but I had a few favourites.

“Calluses knotted her palm LIKE a topographical map of a foreign country.” This took me back to all the maps I’d studied over years and also took me back to my frustrations as a writer, not being able to come up with such gems.

And who hasn’t woken in the morning, unable to describe themselves as feeling thus; -

Do you have to be female to understand the feeling of; - “I shivered beside the fish-pale nakedness of two dozen other women, all of us mads ugly and unsecret, LIKE snails pulled from their shells.”

I guess I’ll think of that passage every time I’m in France eating garlic snails.

As mentioned at the beginning of this piece I found this book an experience and, if you look at my Goodreads “Top Ten Novels” It sits proudly there having knocked off Cal by Bernard MacLaverty – no mean feat. I see Alix E. Harrow as a poet that has turned to prose, I don’t know if that is true, but it certainly feels that way to me. Thank you Alix for a wonderful experience.