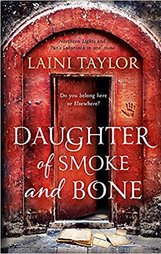 Daughter of smoke and bone.

Chosen and read as an escape from reality, during the Covid-19 pandemic of 2020, and it turned out to be just that, a distraction from the world news of deaths from Covid and the world riots and demonstration around Black Lives Matter.

A number of worlds exist in this novel, full of fantastic creatures that take you through aspects of magic that are new but somehow, still believable. To explain anything about those worlds, or aspects of the same worlds, would be instant spoilers. Safe to say though that ‘show don’t tell’ is important to this author so you don't get a description of a being with horns, you get a decoration attached to horns that you weren’t aware of.

Extremely well written, and that is probably one of the main reasons the series is so popular. Billed as YA, an oldie like me has to remember being that age and getting lost in The Lord Of The Rings all those years ago. Some of us, I guess, refused to grow up and still need to escape to fantastical worlds now and then.

As a ‘first in series’ you, the reader, are led in gently and it is not a spoiler (happens early on) to say that the protagonist has, what seems like, a normal life before it is revealed that what she sketches as an artist, is real.

Thoroughly enjoyed and gave it five stars because it took me away. If I had to make one small criticism, I do not like the current trend of sometimes placing dialogue on a page and telling you, after it, who had spoken that dialogue, because I have character voices in my reading head and it makes me read that dialogue twice. As far as I could tell it only happens towards the end and perhaps the author was looking for an alternative to ‘she said’.

I suppose the proof of the pudding would be whether you read on into the series and this novel is definitely an introduction to what was intentionally written as a series. For me, no, I have lots more on my ‘to be read’ list. For others though, maybe younger and with more time on their hands, this will be an introduction to a world they will get immersed in for years to come.