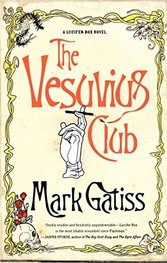 After a series of more heavy novels, I looked for something lighter and found this as a recommendation, I think on Goodreads. I was not disappointed as light and 'fluffy' it was, in every respect. It was the first of four novels downloaded for a November holiday but, after reading the sample, ended up being read at home in Wales, at 32,000 feet and on a sleepy Cyprus lawn, with a red wine.

Others have reviewed this book as being a parody of a number of successful film scripts but for me the plot, plot development and build up to the finale were not as important as the tone of the novel, with its batty characters with equally batty names. Miss Bella Pok, only outdone by Lady Midsomer Knight, to mention only two of the many characters entwined in this story of many twists and many changes in pace. My initial mental image of Lucifer Box, our hero and main character, was of a younger 'The Colonel' from Fawlty Towers, it morphed into David Niven and started to become Sean Connery before I realised that Niven had played Bond in Casino Royale. Box takes us on a romp through the early twentieth century, (he forgets that years now start with nineteen and not the eighteen that he's used to) in London and Naples, as an assassin and as a detective.

Will I go on to read the second in the series? Probably, but not straight away. A few heavier novels are needed to get my brain back into normal mode but when a break is needed, I know where to go