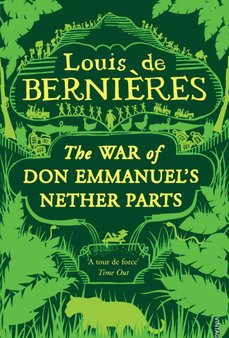 Berniere's first novel and winner of the "Commonwealth Writers Prize, best First Book, Eurasia Region". Village politics in South America. The back of the book says that "Dona Constanza tries to divert a river to fill her swimming pool, she starts a running battle with the locals."

The locals decide that the Englishman Don Emmanuel should be their spokesman but Don Emmanuel has learnt his Spanish from the peasants along with their slang and profanity. He also speaks as if he has no front teeth as he has learnt from peasants who, in the main, have no front teeth. Since this was pointed out to him he has started to speak the language that he has picked up from historic romantic novels and can now come over as being sarcastic as well as rude. The following quote is from the first encounter of the two adversaries and explains the title of the book. It does not spoil the plot as it occurs early on in the novel, after the introduction of the various characters.

The maid flushed with pleasure, and her mistress flinched visibly. 'Don Emmanuel, you are as charming as ever. Now, as I am very busy, as you see, perhaps you will tell me the purpose of your visit?'

Don Emmanuel made a show of scrutinising the degree of her industriousness and bowed, removing his straw sombrero with a flourish, 'madame will forgive me for not perceiving her busyness. It is a sign of the highest breeding to be able to be busy whilst appearing idle to the uninformed observer.'

Her mouth tightened and her eyes flashed before she regained her composure. 'Senor is full of signs today. Now,what is the purpose of your visit?'

'It has come to my ears, dear lady, that you intend to divert with a canal the very water which waters my land and that of the campesinos, in order to replenish your piscina. I must say, as I know you appreciate frankness, that I and the local people will be fucked, buggered and immersed in guano of the finest Ecuadorian provenance before we permit such a thing to occur.'

'The permission,' she rallied, her temper rising almost immediately beyond control, 'is not yours or theirs to grant. I will do as I wish with the water on my land.'

'I appeal,' said Don Emmanuel, 'to your highly developed social conscience and to your concern for my nether parts.'

'Your nether parts?' she repeated with astonishment

'Indeed Senora. In the dry season, The Mula is the only water where I may rinse the dingleberries from my nether parts.'

'Dingleberries!' she exclaimed with mounting outrage.

'Dingleberries,' he said, assuming a professional air, 'are the little balls of fluff that appear in one's underwear and sometimes entwine themselves in one's pubic hair. Frequently they are of a grey colour and woolly nature.'

Having read thus far, knowing the blurb on the back of the book and having read some of the reviews at Amazon, you could be forgiven for thinking that this novel tells a story of internal politics within a small town. In fact the author allows himself a much larger canvas and this novel develops into the history of the beginnings of a people, written with fable and magic. It is full of death, the fate of the 'disappeared', levitation, magical cats, jungle, mountains, battles, returnings from the dead..........need I go on. A fascinating read that I would thoroughly recommend.