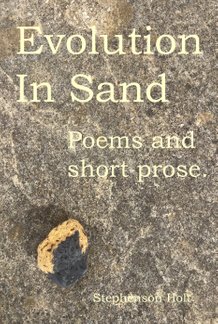 Evolution In Sand is a short volume of poems, created over many years while writing novels and sometimes used as a remedy to block.

Short prose pieces have also found themselves into this volume.

In search of a title and already having a poem called Evolution In Sand, the finding of the sand kiln brick, on the beach at Llanelli, where it had been rolling in the waves to become rounded, inspired the poem Evolution In Sand (Reprise) which gave me title and cover picture.