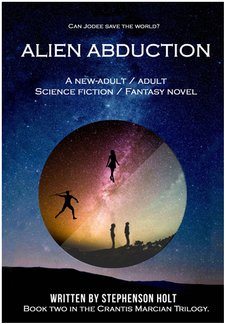 All I can say is, wow! This book got me so hooked that I stayed up most of the night reading it. I couldn’t put it down! It’s written in first person, with multiple POV‘s. There is alien abduction, evil ex-husband‘s, breeding, and evil aliens trying to take over the world! If you’re looking for a sexy series about a girl trying to find herself, check out this series!

I sat at the breakfast table and looked on with envy at my two young female lodgers, as they fussed about between their bedrooms and the bathroom. If only I’d had a life like theirs, away from home, free and easy, student enjoyment the number one priority. For me it was more university while living at home, a steady boyfriend, engagement because my friends were doing it, and then after graduating, the inevitable slip into marriage, then finding incompatibility and finally divorce. I was jealous of these girl’s nineteen years, sad about my thirty-six years and even felt as if my life, since that divorce, was wasting away. Every time one of these girls looked at me for a compliment though, it was given with a smile plastered on to my jealous face. Looking at them and wishing I was their age again was no good for me though, because I knew, even in my braver moments, that there was no way I could have worn a skirt that tiny, but would have maybe worn a top that low in my braver moments. There was no way though that I could say anything to them without coming over as a mother figure and then feeling even older than my years.

I would have killed for thinner thighs like that. For me it was knee length or just above and directing boy’s eyes upwards. Boobs caught Graham, hubby, but I wished they hadn’t now. Soon as he told me he was going, I asked if she had thin thighs before slamming the door and crying after his nod.

“Listen girls,” my head came back into the present, helped by the intense perfumes wafting through the house. “Now that I’ve finally got you both together. Me nagging you to get a third to fill that empty bedroom is for your benefit. The house rent shared between three of you would save you a lot of money, compared with you paying half each. It’s for your benefit I’m saying this, not for me.”

Me getting the house near the town centre in our divorce settlement, was a blessing and a curse. It gave me a roof over my head but also a mortgage to pay after buying Graham out. When the college expanded and students were desperate for somewhere close to college to live, converting rooms to bedrooms was the obvious thing for me to do. It also provides company for a lonely, mid-thirties single.

Whether they are two or three sharing, the rents pay my mortgage and the money I take out of my veterinary practice pays for everything else.

Michelle, the dark and dipsy one answered my question, bending towards me as if practicing a future lean into a male student to capture his heart with her cleavage. “Tilly love,” she informed me. “We keep saying, every student we know is already fixed up for accommodation, but if anyone does turn up…”

Things haven’t changed. Men are still hypnotised by mammary glands and girls use that to their advantage.

Chloe, much more mature and confident, joined in while wiggling her skirt to be what? Higher or lower?

“We do keep our ears open Tilly. There’s bound to be someone, eventually, who isn’t getting on with flatmates, or needs to get out of halls. As soon as we hear, we’ll let you know. Sharing rent between three would give us more going-out money so we do try.”

If I was young and had their spirit, it’s Chloe I would have loved to have been. Blonde, out of a bottle, but suiting her baby-blue eyes to a tee, and with a fake tan, she looked the business and her makeup skills were exemplary, making a bloke think she hardly wore any and her face was that soft naturally. They may even think her exotically Scandinavian. The other bloody thing about being nineteen is that they seemed to be able to eat and drink anything without putting on weight. They would have a shock when they reached my age, the era of sticky calories. Was I turning into a grumpy old woman?

On the few occasions I’ve gone out for a meal, a date set up for me or once, only the once, through a dating agency, Chloe did my makeup and I felt a million dollars. Maybe the makeup was too good because every time I go on a date, it seemed to me that the other party was looking for quick romp before moving on to their next client. I explained this to the girls after one disaster, about the gent’s need for a quick romp, and I received Chloe’s scrunched up eyes and nose, that came with an “And?” Since that day they both seem to think that I nag them solely because I miss having a bloke around, or maybe not around but just in me, for one night only. Do they honestly believe that one poke would put a smile on my face for a couple of months?

Girls these days seem freer. I am just not like that. Maybe that’s why my ex decided he was comfortable with me having a full-time job, comfortable with my cooking and cleaning, but sex was something that you got elsewhere, with a woman more experienced, who hadn’t been tied down in only her second long-term relationship.

The girls left for what they told me was a pub then home, no club afterwards, and I knew it was a lie because I’d got used to their calendar. Pub and club tonight, hence the skirts that just about covered bums, pub only tomorrow, wearing jeans.

I made myself a hot chocolate, pulled my legs up onto the settee and flicked on the DVD player using the remote. The sloppy love story was still in the machine and started from where I’d left off, not wanting the girls to see me crying, as they did the last time that they’d arrived home early to find the lonely thirty-six-year-old. The cushion, clinging to me, was my lover for the night, maybe hugging me, maybe being between my thighs if the film got steamy.

I went to bed hours before the girls came home but did hear them come in. Just like a parent, I believe my sleep was light but, once they were in safely, my sleep became deeper.

Nothing was mentioned at breakfast, about going on to a club, so I said nothing about it. “Girls, it’s my time on the vet’s roster to do the evening shift. You’ll probably be home and back out again before I get home so, please stay safe and I’ll see you later tonight.”

“Only if a handsome and single farmer has a breach birth calf to deal with and finds me attractive with my arms up to my elbows in cow fanny, that sort of thing.”

“Yuck,” Michelle told me. Think we might stick to our fine art course and the pub in the evenings.”

Because of me having a late shift, the girls had the morning shower before me, they left for college, and I left for work just after lunchtime. Another boring day for Tilly then.